What caused the disappearance of Malaysia Airlines flight 370?

Malaysia Airlines Flight 370 disappeared on March 8, 2014, seemingly without a trace. Investigators have struggled to discover what caused the plane to disappear as well as where it ended up. With only sparse evidence available, a probabilistic analysis is needed.

Flight MH370 left Kuala Lumpur at approximately 0:41 local Malaysian time (16:41 UTC), heading towards Beijing. It stopped transmitting its location and lost contact with civilian radar around 1:21, northeast of Kuala Lumpur. At about the same time, a Malaysian military radar detected a plane heading west from the location of flight MH370. That plane was last seen over the Andaman sea at 2:22. 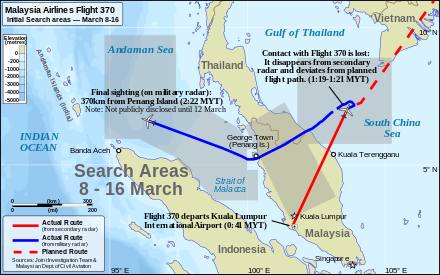 Malaysia Airlines flight ​MH370 had an emergency (electrical, weather-related, or another event) that disrupted the flight but allowed it to continue flying for many hours.

Passengers hijacked Malaysia Airlines flight ​MH370 with the intent of landing the plane.

Malaysia Airlines flight ​MH370 crashed soon after takeoff in the South China Sea (due to a fire, electrical problems, turbulence, a broken wing tip, or being shot down).

It appears that someone on MH370 deliberately stopped communications and flight tracking information in order to fly off course. Approximately 39 minutes after take-off, two minutes after signing off with the Malaysia control tower and before signing on with Ho Chi Minh control tower, MH370 ceased contact with no warning and no distress call, and disappeared from civilian radar. Military radars, which do not rely on communications from the aircraft, tracked an aircraft matching MH370’s profile flying west and making multiple adjustments to its flight path, seemingly straddling the border between Malaysia and Thailand.

The plane that was presumably MH370 changed altitude (flying both extremely high and low). This may indicate an attempt to avoid radar or incapacitate the passengers and crew, increasing the likelihood of a suicide attempt or hijacking.

The unidentified plane assumed to be MH370 was not detected west of Penang Island, and data from an Inmarsat satellite indicated that MH370 continued flying for hours, on a route that took it south towards a point just west of Australia.

Overall, the plane seemed to be in good condition (though it previously had a broken wing tip). There have been no reports of systemic problems from other similar Boeing 777-200 planes.

The pilot and co-pilot seemed stable, although according to some reports the pilot may have had some problems with his marriage. There were no reports of a suicide note, or any other social factors that would lead to suicide.

The pilot practiced the presumed flight path of MH370 on his home flight simulator, and had no recorded social or business plans for after the flight.

There were no compelling terror suspects, though two Iranian passengers were traveling on fake passports in a manner consistent with asylum seekers.

There have been no public ransoms, demands, or parties otherwise claiming responsibility for what happened to Malaysia Airlines flight MH370.

Flammable materials on board

There was a shipment of flammable materials (lithium-ion batteries) in the cargo hold of Malaysia Airlines flight MH370.

Debris started showing up in the Indian Ocean 16 months after the plane went missing, while no debris has been found in the South China Sea.

Bayesian At Heart
May 28, 2021 at 9:14 PM
I'm not really sure where some of your conditional probabilities are coming from, since (at least some of them) seem to be questionable in terms of quality. Putting aside the opaque analysis of how a lack of evidence for pilot suicide seems to have a surprisingly small effect on that outcome's probability, there are clear problems with the "mechanical failure" evidence and analysis presented. First, there were known potential problems with Boeing 777s that, if unfixed, could lead to an emergency event. (EgyptAir 667 experienced a fire in 2011 that could have easily caused similar effects to MH170 had 667 not been on the ground at the time of the emergency.) Moreover, Helios 552 should give your model substantial pause: it featured a plane that was newer than MH170 (only 8 years old at the time of the crash), the aircraft was similarly of a reliable model (the "classic" variant of the 737), and the aircraft continued flying for hours in an orderly flight path after the incident.

Bernard Brandt
Jan 13, 2021 at 2:23 AM
7. MOTIVE (continued): It is a sad truth that some PRC officials have laundered government money by going to casinos in Macau, to the tune of billions of yuan. Other casinos in other nations, such as Malaysia and Kuala Lumpur in particular, have also been so used. It is therefore more than likely that a very few of those passengers may have had large quantities of currency, jewelry, or other valuables in their possession on the flight back. 8. MEANS: The elevation to 45,000 feet can be explained by the pilot's depressurizing the cabin and rising to a height where the passengers would quickly become unconscious, suffocate, and die. The period of twenty minutes can be explained as the time necessary for the face masks to run out of oxygen for those few who managed to put them on. The forty minutes remaining time before reaching Penang would be more than sufficient time for the pilot to rob his few victims. While it would be fatal folly for the pilot to jump at even 20,000 feet and normal cruising speed, the stall speed of the Boeing plane he was flying was 135 knots, well within proper speed for a parachute jump, and the autopilot could be set for a few minutes for a speed and altitude which would permit a safe jump. Finally, Penang has thousands of hectares of farm fields, which would permit a safe landing. 9. OPPORTUNITY: An article in 'The Atlantic' has noted that the pilot was of a social class that permitted him to visit the casino in Kuala Lumpur (gambling is forbidden to Malaysian citizens), and that in fact he was a regular visitor. As visitor, he could observe those passengers who regularly also visited the casino. As pilot, he would also have access to the passenger list, and be able to determine which casino or gambling clubs the passengers would visit. QED.

Bernard Brandt
Jan 13, 2021 at 2:02 AM
To summarize my hypothesis: 1. I agree with Rootclaim that it appears that intentional acts of the pilot caused the crash of the plane. 2. If the intent of the pilot had been to commit simple suicide by plane, that intent would have been most easily effected by crashing the plane soon after takeoff, as happened to the Malaysia flight of a week or so ago. 3. In order to determine just WHAT the pilot intended, it would be reasonable to infer intent from his actions. 4. Those actions, in chronological order were: a) diverting from the normal route from Kuala Lumpur to Beijing at the point that the plane had left Malay radar and airspace and was about to enter Vietnam's radar/airspace, approximately one hour after takeoff; b) doubling back toward Malaysia, at a heading toward Penang Island, the pilot's home town, and also the location of Penang International Airport; c) immediately after the turn, raising altitude to 45,000 feet, and holding that altitude for approximately 20 minutes; d) subsequently lowering altitude to approximately 20,000 feet, where it remained for the remainder of the flight to Penang, which the plane reached about 40 minutes afterwards; e) instead of calling Penang International for request to land, circling to the east of the island, flying west over the island; and finally f) flying west for approximately four hours, until the plane ran out of fuel, presumably crashing in the Indian sea. 5. The effect of all of these actions would appear to be a combination of concealment and misdirection: the pilot broke from radio contact before Vietnam could acquire the plane on its radar; the change in direction could be explained by an emergency rerouting to Penang International; if Malaysia air forces were tracking, they would not be able to stop the plane, or follow it for the remaining four hours of its flight, by which time it would have left Malay airspace. Finally, in addition to crashing in an unknown location, the black boxes in the plane have a maximum time of 2 hours, whereupon they rerecord over and erase earlier recordings. By the time the plane crashed, all evidence of what happened in the initial two hours of the flight would have been erased. 6. HYPOTHESIS: The pilot intended to murder the passengers, for the purpose of robbing a few of them. He then intended to escape by parachute over Penang Island, assuming a new identity, and living off of the proceeds of his robbery. 7. MOTIVE: The majority of the passengers were Chinese nationals, returning from Kuala Lumpur to Beijing. While most of them were likely innocent tourists (including a group of Chinese calligraphers), it is likely that at least a few were high PRC officials.